That was how my interview with flautist, teacher and concert producer Andreas Sønning began. There is no doubt that he is deeply dedicated to his work, despite having been at the Norwegian Academy of Music for over 30 years.

One of his pet projects – the course European Creative Futures (ECF), which is usually carried out with gatherings including participants from a number of different countries – has been shaped by the pandemic. This is the first time the course has been arranged digitally. But it is perhaps all the more vital to explore the subject when times are tough.

The project-based course gathers students from the field of stage arts and creative branches in general, and puts them together with students in the areas of management, marketing, finances and technology. The groups work together with practical tasks and attend lectures. The course ends with what they call an intensive project.

“The EFC is really unique. The course offers not only tools and principles for life as a professional musician, but also gathers talented people from four other universities,” Sønning points out. The young talents are studying everything from music production, event coordination, finance, entrepreneurship and cultural management to art, video and advertising, and the list could go on and on.

Where is the value?

Sønning is interested in value chains – the entire apparatus that works together to produce services and products, including those in cultural life.

“Within innovation and entrepreneurship, which are what ECF is all about, we talk about value chains. Several value chains form value systems. Musicians are never alone; they are part of a larger network,” he explains. “Value networks can consist of people who organise cultural life, arenas, financial institutions and other supporters. In value workshops we develop products together with people who have a need for what we can offer.”

Andreas Sønning practises what he preaches – two of his students have recently landed a dream contract as musicians, with the debt-collection agency Lindorff, after an energetic promotional effort accomplished with the advice of the Associate Professor.

﻿﻿Jón Arnar Einarsson and Oskar Fagelund laid a golden egg after one of Andreas Sønning’s courses.

Structure of the course

Here you can read an article about two of Andreas Sønning’s students. 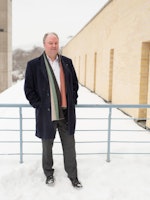 Collaboration is a key aspect of ECF – and obviously a core value for Sønning. He wants the students to identify their own values, and their role in a team. What can you, in particular, contribute?

Sønning quotes from his own book when he lists six challenges he has identified as part of this work. Among other things, he points out that times are changing, especially with regard to technology. Merely in the period from when the Academy closed in March until today, our professional network has increased its digital competence considerably .

The constellation of different disciplines also makes it even more relevant to address current social issues in the project work, and to communicate values. Previously, students have worked with subjects ranging from the age boom and refugee crisis to the environment.

“It’s no longer just a case of showing how good you are at playing or composing.”

He emphasises that he has never compromised with his own musical integrity – despite having worked with multinational companies for 27 years, one might say.

“But in order to use your skills in real life, you actually have to know something about what society needs,” he says.

“And you have to have a passion for something.”

"I developed an additional belief in my own potential, like an additional self-confidence. As I now see new fields for my future work paths, I also have new people who could be partners in different ways."

"I gained experience and training using my creating skills for structuring my own future work. (...) Learning from the interdisciplinary processes has been a great benefit to me."

"I got interesting input on new trends in general as a basis for idea generation for innovation."

"I saw the transfer potential of the knowledge base of ECF relevant also for a pianist like me."

"Participating in non-musical working processes was adaptable to what we need to learn for future work as program developers and entrepreneurial frameworks for any stage productions."