How did a white van and an elective course become the path between two music students and one of the world’s largest debt-collection agencies?

It’s the end of November in the fateful year of 2020. The Christmas party season has already begun – although there are no parties, gatherings or other social activities to mark the end of the year. Perhaps the Christmas party budget will be spent on something else, or transferred to next year. Cultural life is reeling economically, musicians are fighting for support, and crisis solutions are being extended.

In the midst of this, two music students – singer Oskar Fagelund and trombonist Jón Arnar Einarsson – have landed a huge contract that many experienced musicians can only dream of.

Associate Professor Andreas Sønning at the Norwegian Academy of Music has served as the head of the elective course of concert production for many years. Together the three of them have come up with the concept of bringing music to where people are, whether this is in front of the entrance doors of private homes or outside the window of an office building. The experienced lecturer suggested that Einarsson and Fagelund try to sell their product to companies.

The next step involved meticulous promotion work including a website, photos and texts. Film students at Kristiania University College were responsible for producing the promo video, while Fagelund spent his time contacting potential customers.

“Every Sunday for two or three months I sat and created mailing lists all day,” he says. After 280 mails, numerous phone calls and countless texts they finally got a nibble.

“It’s absolutely insane!” the singer exclaims when the duo describe the contract – and the fee. Before Christmas they will be making three more videos, and will present several mini-concerts in front of the staff’s windows, in both Drammen and Trondheim.

From desperation to innovation

Fagelund had already tried busking – he lives in the white van the duo travel around in. Last year he and a fellow student drove all the way to Italy on a busking tour.

“It went well, but we didn’t earn much money, and it took an incredibly long time,” he explains.

Einarsson began busking at the age of 16, and feels that he brings this experience with him on the stage.

“When you’re standing on the street trying to get the attention of people who aren’t looking for music, and then play on a stage where people have taken time out of their day to come and listen to you – it’s so much easier!”

Duo Nyjung, formerly called Duo Desperato, have been playing together for two years.

“You have to let go of the idea that everything must be perfect.”

Oskar Fagelund Singer and student at the Academy 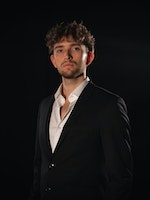 They point out that the current project is neither stage music nor street music, but a sort of combination of the two.

“For example, the electric piano we have with us sounds quite all right, but in comparison with a real grand piano it’s terrible,” Fagelund explains. For the concerts in December they don’t know yet if they will be standing and playing in the rain or snow. “But this is a completely different thing. You have to let go of the idea that everything must be perfect.”

“We never considered being very conservative or traditional,” says Einarsson. The trombonist, pianist and composer describes their repertoire as including everything from commercial songs to theatre, new music and storytelling. They have also worked with a director. On the Christmas tour old favourites such as “O Holy Night” are on the programme, but this does not affect their musical integrity. “We want to be more than just music. A show, more than a recital in the Levin Hall [the chamber music hall at the Academy]. A performance rather than a concert.”

“We don’t market ourselves by saying that we’ll come and entertain people. We come to communicate, and to convey the values that they want us to promote,” Fagelund adds, and praises his versatile colleague highly. “I can’t imagine being able to work with anyone other than Jón in the same way.”

The two music students take an apparently carefree view of the future. Einarsson thinks that the project will still account for part of their income, even after the most digital year in the history of cultural life has ended.

They agree that it depends on which direction they want their careers to take after earning their Bachelor’s degrees.

Do they have any tips for other musicians who are unemployed and desperate now?

Fagelund is quick to recommend Andreas Sønning’s course on concert production and Erlend Hovland’s Performance Studies as subjects at the Academy.

“Erlend presents the idea that there is something bigger than just being an orchestra musician. That’s exactly what we’re doing. This applies to everyone who is involved in art – it’s about developing a good product through knowledge and the development of that knowledge.”

Einarsson says, “You’re selling yourself and your work regardless of whether you’re a freelance musician or have a permanent position.” He admits that he is not especially comfortable with that.

“That’s why your product has to be something you love. Otherwise you’ll never find the energy to sell yourself and earn a living from it.”

Fagelund enthusiastically adds his own view of the matter: “But you also have to try things out. Go outside your comfort zone, outside the norm. Dare to be innovative.”

“Your product must be something you love. Otherwise you’ll never find the energy to sell yourself and earn a living from it.”

Jón Arnar Einarsson Trombonist and student at the Academy 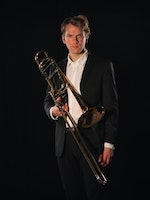